Spanish Rule in the Americas 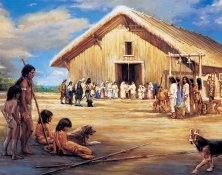 The King of Spain and the Catholic Church ruled Spanish settlements throughout its empire. Both government and religion increased power by collecting great wealth from Spain's many colonies worldwide and converting the natives of those lands to the Catholic faith. Spanish society showed little religious tolerance to those who were not Catholics.

Yet, Spanish culture respected ethnic diversity. Intermarriage (mestizaje) between people of different races and cultures was common throughout the Spanish empire. From this is derived the term mestizo to identify a Hispanic person of mixed Spanish and Indian descent. Because there were few Spanish women in frontier Florida, Spanish men often married Indian women. Mestizos were likely an important part of mission society.

Religious missionaries to Spain's colonies taught the Christian faith and maintained the people's loyalty to the King. During Florida's first Spanish colonial era (1513-1763), Catholic friars and priests founded over 100 missions in the southeast region of North America. Most of these wilderness churches were in small villages located along El Camino Real (Royal Road) between St. Augustine and Apalachee Province more than 200 miles to the west.

In 1607 some Apalachee Indians asked for Catholic friars to minister among the native peoples. By 1633, two Franciscan friars, Pedro Munóz and Francisco Martínez, founded the first two permanent missions in the province, and five years later the first Spanish soldiers arrived. San Luis, originally named San Luis de Inhayca, was probably among the first missions to be founded. The twin powers of church and state set about converting the province's native peoples to Christianity and collecting wealth in the form of food grown in Apalachee to feed St. Augustine's soldiers and settlers.