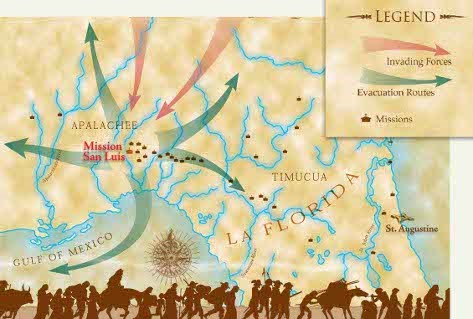 With the missions destroyed, all that remained of Spanish Florida was St. Augustine. The English raiders drove Florida’s remaining Native Americans into slavery or exile. Nearly all Florida Indians in the Spanish colony had died of disease and in wars with other Indians and European colonists. Beyond St. Augustine, the rest of the colony was desolate and empty of Spaniards and Native Americans. So it would remain until Spain traded the Florida colony to Great Britain in 1763.

In Mobile, the Apalachee survivors of San Luis formed a Catholic parish and their French hosts provided a priest. On September 6, 1704, the first recorded Apalachee baptism took place there. Sixty years passed before 80 or so Apalachees moved from Mobile to central Louisiana.

They settled in Rapides Parish along the Red River. Time passed and these descendants of Mission San Luis disappeared from American history books for the next 200 hundred years. However, about 300 Apalachee descendants—today the only known descendants of Florida’s original inhabitants—have survived though not without considerable troubles.

The Mobile Apalachees survived a 1704 yellow fever epidemic. In 1803, American settlers in the Louisiana Territory burned Apalachee cabins and crops, stealing their land. In 1835 the Louisiana Apalachees fled to swampy bayous and remote hill country, withdrawing from white society. Some of this group found that life was easier for them if they hid or even denied their Indian heritage.