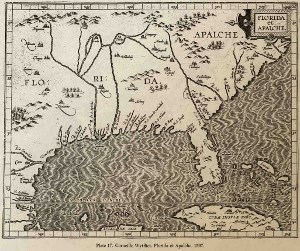 The King of Spain said that La Florida extended from Key West in the south to Newfoundland in the north and over to Mexico in the west. The other European countries did not agree and reluctantly allowed Spain to rule wherever Spaniards made "New World" settlements. 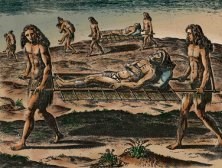 In 1526, Lucas Vásquez de Ayllón founded the first Spanish settlement in present-day United States. He named it San Miguel de Gualdape. Its exact location is not known, but it was in Guale Indian territory along the present-day Georgia coast. The colony did not last long after Ayllón and most of the 600 settlers and slaves died. The 150 survivors returned to Hispaniola (Haiti).

This did not keep other adventurous Spaniards from exploring Florida and nearby lands. Dreams of great riches—like silver and gold in South America and Mexico—lured Pánfilo de Narváez (1528) and Hernando de Soto (1539) to seek their fortunes throughout the southeastern regions of La Florida. Native peoples in the Tampa Bay region told the Spaniards that riches could be found in the Apalachee Province. The de Soto expedition was the first from Europe to camp where Tallahassee, Florida is today.

With the Spanish noblemen and soldiers came Catholic priests to convert the pagan Indians to Christianity. These Spaniards found no riches. These priests converted no Indians. Most of the explorers died, but a few survived to tell Europe of their adventures.

The myth of Apalachee treasure was represented on early European maps by the name given to the Appalachian Mountains. Tragically, these European explorers and the many immigrants who came later spread diseases and germs that killed unknown thousands of Native Americans for many years afterwards.