In the Spanish and English Colonies 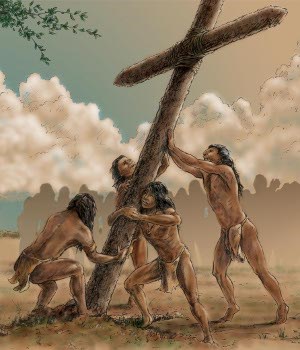 Both Spain and England participated in the slave trade of Native Americans and Africans to supplement their colonial labor forces. However, the Spanish government did not allow Florida Indians to be slaves as was the law and practice in other Spanish colonies.

Florida's governors and its religious leaders allowed the Hispanic colonists to force Indians to work for little or no wages. Many natives were badly treated, poorly fed, and died of forced labor. Much of St. Augustine—the Castillo de San Marcos an example—was built by forced Indian labor.

Slaves were present in Florida, though not so many as in England's Carolina colony where there were twice as many Africans as whites. Spanish law derived from ancient Rome and treated slaves and women differently than English common law derived from the Magna Carta of A.D. 1215. Under English law, a slave was property (chattel) that could be bought and sold freely and punished, even to death, without any legal or civil rights. English wives were treated as property of their husbands. 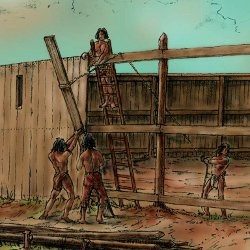 Spanish law recognized slaves as unfortunate persons who still had legal rights, could sue their owners in court, and could own property. Both men and women slaves could petition the Spanish King. The law allowed for slaves to purchase their freedom and to attain the rights of all the King’s free subjects. In Florida, the Spanish government granted freedom to escaped slaves from England’s American colonies if they converted to the Catholic faith and served in the colonial military.

St. Augustine had a free African settlement nearby, the first free black community in North America. Black slaves who escaped from the English colonies north of Spanish Florida settled together at Fort Mose. The men formed an armed militia to defend their families from English slave raids.