Archives and Ancient Soils ~ How we know what we know 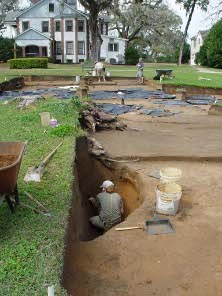 Beginning in the 1980s, archaeologists excavated the floors of Spanish houses and San Luis trash pits. These scientists discovered and studied the remains left behind by the Apalachee and Spanish villagers. These artifacts and biological debris added to the history of changes in traditions, practices, and resources during the 50 years San Luis existed.

Most of the Mission San Luis story told so far has been written in Spanish reports, letters, and other historical documents and preserved in Spanish archives. These writings reported on military actions, government decrees, court decisions, and religious activities of the time. The Catholic friars with Apalachee assistance wrote down native customs, ceremonies, and spiritual practices.

Physical evidence found and studied at Mission San Luis sheds light on the routines and customs of everyday life in the village. It is the artifacts and biological remains studied by Mission San Luis’ archaeologists that documented how the Apalachee and Spanish learned to live together.

For 50 years at San Luis, Native American and Spanish traditions and customs blended together in a shared Hispanic heritage. This is best seen in how each culture began growing the traditional foods of the other. And how those foods were cooked and eaten by the Spanish and Spanish-Indian families.

Here is what archaeologists found: the bones of pigs, chickens, cattle, sheep, and horses in trash pits at Mission San Luis. The Spanish added farm animals, olive oil, and wheat to the three main Indian foods – corn, beans, and squash. Also, Apalachees and Spaniards ate fish, domestic animals like cattle and pigs, and wild game, and added to their diet by gathering berries, fruits, and wild plants.

European herbs and spices—some locally grown, others imported—flavored foods prepared for Spanish and Spanish-Indian meals. Families grew food and spices in small "kitchen" gardens, and used herbs as medicines. Catholic friars tended small gardens, assisted by their Indian servants, but relied on food taken as tribute (tithes) from the villagers and prepared by Indian or mestiza servants.

Archaeologists found Indian pots shaped like Spanish cooking pots. This "colonoware" showed the influence of Spanish fashion by changing the shape and function of Indian pottery used to cook and serve meals. Pottery made and imported from Spain and its colonies was found, too.